(1) The up-conversion pump emits green light laser, which mixes rare earth ions in the solid material and is pumped by a semiconductor laser or other light source. The green light laser is generated by directly utilizing the energy level transition of rare earth ions.  This method is based on the upconversion effect, that is, the wavelength of laser light is smaller than that of pump light.  The up-conversion luminescence mechanism of rare earth ions can be divided into three processes: excited state absorption, energy transfer and photon avalanche. 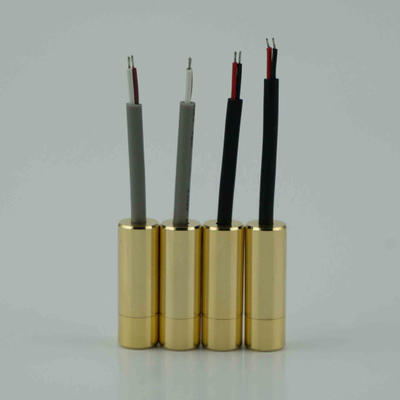 And application fields, semiconductor lasers can be roughly divided into long wavelength and short wavelength two.  On the short wavelength side, due to the difficulties in material preparation and device technology, the research progress of semiconductor green light laser has been relatively slow, and it has not reached the practical level for a long time.

(3) Nonlinear optical crystal frequency doubling method. This is a common method to realize green light laser.  This method can be divided into direct and indirect methods.  The direct method is to directly input the semiconductor laser to the wavelength converter and get the green laser output after frequency doubling.  This method is characterized by simple structure, easy frequency doubling and high conversion frequency, but the output green light laser linewidth is wide and the wavelength stability is poor.  The indirect method can be further divided into two kinds :a. Solid state lasers activated by rare earth ions such as Nd3+ and Er3+ are pumped by a semiconductor laser, and then the frequency doubling is realized through wavelength conversion components.  This method is more complex in structure, but it can get good laser spectrum and beam characteristics.  In addition, this method can also take advantage of the advantages of the long energy lifetime of the solid-state laser to realize the energy accumulation, so as to obtain high energy laser output.  B. Laser output can be achieved by using self-doubling crystal materials that can both emit laser and realize wavelength conversion at the same time, such as potassium nitric acid co-doped with magnesium oxide, aluminum borate.

Because the human eye is most sensitive to green light,532 ITM pulsed laser can be used in ophthalmic surgery.  The pulsed green light can also be used to treat vascular diseases. A 532nm Q-switched pulse laser with an output power of 3W was designed and manufactured to treat apoplexy.  Due to its high power, the pulsed green laser has a relatively short action time on the skin. In this way, the laser will not generate non-selective heating on the skin tissue around the target tissue, which will not cause thermal damage and reduce the risk of surgery.

2. Application in the field of color display

Compared with the other display lighting, color laser display technology has a wide color gamut, high purity, flexible display screen size, no harmful electromagnetic radiation and other unique advantages, can be used in home theater, digital cinema, large screen projection, public information screens and teaching demonstration, virtual reality simulation, and many other fields, become a family and future choice for outdoor video display device.  The image displayed by laser is richer and brighter than the existing color TV, which can reflect the real color of nature and even display the virtual color. Therefore, the high-power three-color all-solid-state laser, as the key technology of laser color display, has become an important development direction in the current international laser field.

Green light laser due to its high brightness, focusing spot small, short action time, small heat affected zone, the workpiece will not produce large deformation due to processing and other advantages, can be processed for some high hardness, brittleness of materials, in precision processing shows its unique advantages.  In addition, laser is also widely used in the electronics industry, can be used to adjust the resistance of micro resistors.  With the improvement of laser performance and the emergence of new lasers, the application of laser in VLSI has become a key technique that cannot be replaced by many other technologies, which shows an encouraging prospect for the development of VLSI.

4. As a laser pump source

Ultraviolet laser and deep ultraviolet laser have a wide range of applications in military, industry, medicine, printing and so on. Using green light as pump source is the most effective and extensive way to produce ultraviolet and deep ultraviolet laser at present.  The LD pumped solid-state laser can be used as the pumping source of the femtosecond laser. For example, the green laser is used as the pumping source to pump the Ti:Al2O crystal to generate femtosecond pulses.  In addition, the green laser can also be used as the pump source of the oscillating LD pumped all-solid continuous green laser.  In addition, all-solid green laser also has a wide range of applications in optical storage, information processing, laser spectrum and holography, coherent communication, laser entertainment, lidar, interferometry, optical data storage, military industry and other fields.  Therefore, all-solid green laser has very important scientific research value and broad application prospect.