(1) Up-conversion pumped green laser is doped with rare earth ions in solid materials, pumped with semiconductor lasers or other light sources, and directly utilizes the energy level transition of rare earth ions to produce green lasers. This method is based on the up-conversion effect, that is, the wavelength of the lasing light is smaller than the wavelength of the pump light. The upconversion luminescence mechanism of rare earth ions can generally be divided into three processes: excited state absorption, energy transfer and photon avalanche.

And application fields, semiconductor lasers can be roughly divided into long wavelength and short wavelength. On the short-wavelength side, due to difficulties in material preparation and device technology, the research progress of semiconductor green lasers has been relatively slow, and has not reached the practical level for a long time. 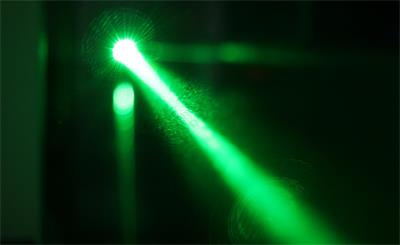 (3) Nonlinear optical crystal frequency doubling method .This is the more commonly used method to realize green laser. This method can be divided into direct method and indirect method. The direct method is to directly input the semiconductor laser to the wavelength conversion element, and obtain the green laser output after frequency multiplication. This method is characterized by simple structure, easy frequency doubling, and high conversion frequency, but the output green laser has a wider line width and poor wavelength stability. The indirect method can be divided into two kinds: a. The solid-state laser activated by rare earth ions such as Nd3+ and Er3+ is pumped by a semiconductor laser, and then the frequency doubling is achieved through the wavelength conversion element. This method is more complicated in structure, but it can get good laser spectrum and beam characteristics. In addition, this method can also take advantage of the long energy level life of solid-state lasers to achieve energy accumulation and obtain high-energy laser output. b. The use of self-frequency-doubling crystal materials that can not only emit laser but also realize wavelength conversion at the same time realize laser output, such as potassium nitrate co-doped with magnesium oxide and Qinyi aluminum borate and KTP:Cr

First, the ultraviolet laser uses the spot to create a nick on the bottle body, the precise focusing spot is small, the processing heat effect is small, no thermal effect is produced, and there is no damage to the material.

Secondly, the cosmetic bottle body obtained by UV laser marking has uniform graphics, high processing quality and good marking effect. It has the characteristics of being indelible and fully avoids the risk of product forgery.

Finally, the processing speed of the ultraviolet laser is very fast. The positioning camera is used for scanning, and the advantages of short pulses are fully utilized in contour cutting, marking and engraving. It is suitable for the use of assembly lines. The flying working method greatly improves the efficiency.

Ultraviolet lasers have low cost, high speed, good quality, and simple operation. They soon played an important role in the assembly line of this manufacturer in Guangdong, and attracted the attention of more manufacturers, helping the packaging and marking of the cosmetics industry to a new level. height.